Reasons to get an Ethics hotline

Why do I need SAFE Hotline?


Benefits for the Employer:


Benefits for the Employee:

According to The Association of Certified Fraud Examiners (ACFE) 2018 Report:


Summary of the Reports Findings 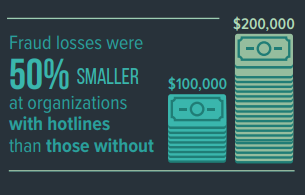 One negative incident can cause years of damage to you companies reputation. Even an honest mistake by an employee can result in an ethics concern, an issue with a customer and can turn into something much worse if left unchecked. SAFE Hotline will let you deal with reported issues before they escalate out of control.